The Tale of the Hard Hat 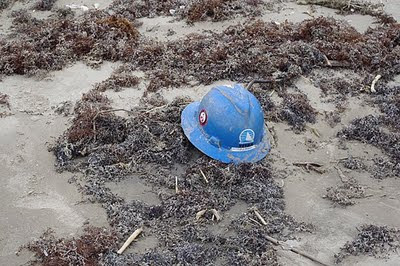 Sandra writes - I haven't finished my travel journal, but just had to pull this story out of my other trip adventures. I think I should send this story to Star Journal or even the Lake Charles newspaper. Let's call this story - The Hard Hat That Blew Away.

Bill and I had planned to visit Holly Beach aka Cajun Riviera. southern La. This area south of Lake Charles was hard hit by hurricanes. We remember Holly Beach as clustered with residents, vacationers, and partyers. It's a pretty beach, but only 5 houses or so built high off the ground and a few trailer campers remain. So, we arrived at Holly Beach about noonish during one of the days we were in Lake Charles for Bill's 50th h.s. reunion. We walked along the Beach (very windy and the Gulf ocean was grey in color). Suddenly, I saw a hard hat. Of course, Bill took a picture of it for an artsy photo, and I picked up the hat to bring home as a souvenir. When we arrived home, I noticed a name on the hat plus by the words on the hat, the hat belonged to someone who worked for a contractor at the oil stations/rigs off shore. I looked up the name on facebook: P.J. Redus. I wrote to him and here is his reply. What a surprise:

"Hey Sandra this is P.J. wow I lost that thing about four weeks ago we were about 150 mile out cant believe you found it! but no I don't need it back but thank you for asking. All the guys out here on the rig got a kick out of it at lest now we know where they go when they blow off our heads lol hope you have a good day and thank you again."

That hat had traveled 150 miles in the ocean! To us that hat would have traveled in 150 miles from Warrensburg to Branson! P.J. is on an oil rig, and he wrote right back.

This is P.J.'s other reply: "Thank you for cleaning it I still can't believe it washed up I got a promotion so i don't need it any more I guess it was gods way of letting me know i was going to get it lol. But keep it might make for a good story to tell your guest about when they come and stay at your B&B"

So, the end of the story is "How far does a hard hat travel on its own across the ocean?" Now, you know!
Posted by Bill Wayne at 9:00 PM No comments:

We are home! Back home to winter, that is. The temperature dropped from 82 at noon in Clinton to 45 at 5 PM here. It was a great trip, saw people I hadn't seen for up to 50 years, saw a lot of interesting places, and ate way too much good food. 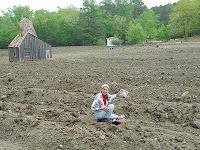 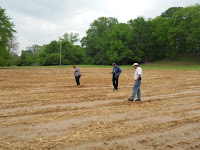 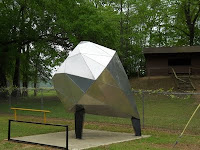 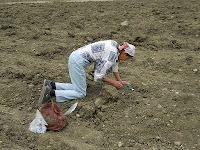 We left Hope AR about 7 AM and headed for Crater of Diamonds State Park, passing the famous FEMA trailers at Hope Airport - yep, they still have some there. We got to the park as it opened, and joined the others in digging for diamonds. 3 hours later we checked our treasures; they say jasper polishes up quite well, which is good since that's what we're bringing home.

We had lunch in Murfreesboro AR (not too far from Nashville AR) with a great traditional chicken fried steak, then wandered off to the local commercial tourist trap, Ka Do Ha Village. This is a set of ancient mounds, with casts of the skeletons placed as found in the excavations of the mounds. They do have a nice, if small, museum telling about mounds and describing the various artifacts found there & elsewhere. One highlight was a search through a field for finders-keepers artifacts; one lady found 4 small points, we found small pieces of quartz. Oh, and they claim to have the "World's Largest Diamond" - its facets are welded together.

Then, it was drive through the mountains for about 3 hours to a new HIE in Van Buren. Tomorrow we get home!!! 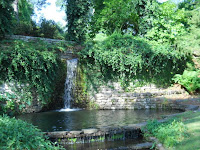 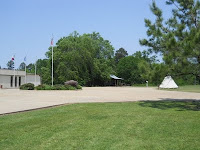 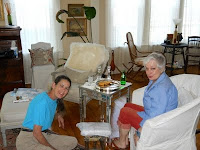 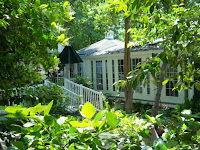 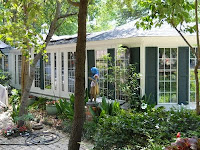 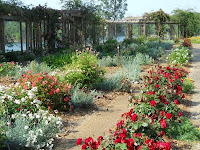 Off early this morning, heading toward home. First stop was Hodges Garden State Park, a formal southern garden with extensive water features. Azalea season is over, but we had a nice walk around and took some pictures.

Then it was on to the Adai-Caddo Cultural Center. The Adai were a group within the Caddo tribe and were converted to Catholicism by the Spanish very early. It's a worthwhile side trip.

Our final enroute stop was our friend Janie's wedding venue in Shreveport - she's a former innkeeper who sold her inn and created a stunning place for weddings. Janie is a classic Southern Lady.

Tonight we're in Hope Arkansas, where we missed former President Clinton by a day - fortunately for us since we just want to do our travel thing without interruption.

Day 5 was spent with LCHS reunion activities. It started with watching a Kilties (girls' marching group reunion) and the 'girls' can still drum with a flourish and march with that shuffling gait even after 50 years. Then, balloons were released for the 26 class members who have died over the 50 years (including a Viet Nam Medal of Honor winner). The evening was spent with a dinner at the Pioneer Club. All in all, about 80 of the surviving 126 class members attended one or more events. Pictures will be made available to classmates later.

Monday includes visits to Hodges Garden, a Caddo Indian cultural center, and a visit with an innkeeping friend in Shreveport. We'll soend Monday night in Hope AR, where we will NOT visit anything to do with either Bill Clinton or Mike Huckabee.
Posted by Bill Wayne at 6:21 AM No comments: 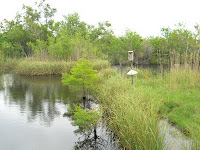 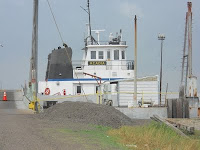 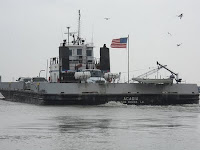 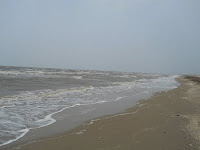 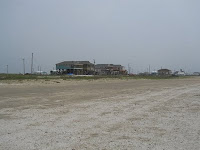 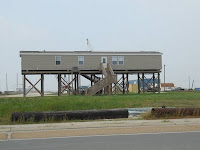 Day 4 would be the first major reunion activity, but that wouldn't start until evening - so we decide to gallivant some more. First we had a great Southern breakfast at the Pitt Grill, an institution here in LC. Then, it was off to Cameron via Big Lake (what the map calls Calcasieu Lake). First real stop was the visitor center for the Cameron Nat'l Wildlife Refuge, where a diorama showed some of the wildlife that inhabits the marshes. Push a button and a couple of animated Cajun's show up to talk about life on the marshes - you know they're Cajuns because they talk like stereotype Cajuns.

On to Cameron, where houses, government and industrial structures are being rebuilt after Rita & Ike - no commercial development yet, though. Had to wait to cross the Calcasieu since only one ferry is running, so we took a few pictures. Then, along the coast 20 yards from the beach we had to wait on some paving trucks. Finally got to Holly Beach, aka the Cajun Riviera, It was essentially eliminated by the hurricanes. Walked the beach, picked up shells (& even a hard hat). People are rebuilding houses, but most of the streets are empty.

Back to Lake Charles, where we had a good, if late, lunch and Sandra got to visit some thrift shops. Found some books. Evening brought an informal party at the Country Club (where many of our dances were held). Saw folks I hadn't seen for 50 years. Turn out was good, and lots of talking and catching up. Sandra's new camera has its limits!

Saturday is some functions at old Lake Charles High and the LCHS memorial at Lock Park. Then we're off to get caught up before the big dinner tonight. Tomorrow we start home, with a stop at Hodges Garden & Shreveport.
Posted by Bill Wayne at 7:20 AM No comments: 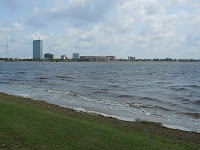 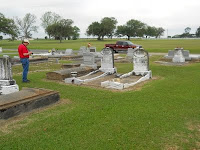 We left Eunice about 7:30 and drove thru Crowley (Louisiana's rice capitol) to Gueydan (the duck hunting capital), where Bills grt-grandfather W.L. Truman, wrote his memoir. We talked with the newspaper editor and the Baptist preacher's wife (W.L. Truman founded the Baptist Church in Gueydan). Also visited the cemetery & took pictures of the graves of Bill's grt-grandfather & grt-grandmother plus his grandmother, all buried in the same plot.

Then it was on to Lake Charles for reunion activities. First we stopped at the "barge") as l'Auberge du Lac casino is called locally); Bill walked out $10 ahead, to make up for the $10 Sandra lost. Drove past all Bill's old schools & neighborhoods, with a stop at the visitor center at sand beach. Would you believe they have live alligators next to the visitor center? Yep.

This evening we met at a restaurant for a drink & dinner. Ran into a couple of classmates Bill hasn't seen for 50 years. Over 40 classmates & spouses showed up at this prelim event; the reunion really takes off tomorrow evening.

Tomorrow we visit the Cajun Riviera and some wildlife refuges, with maybe a side trip to Texas.

Pictures are Bill at the family plot and a view of Lake Charles' skyline across the lake. 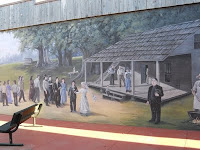 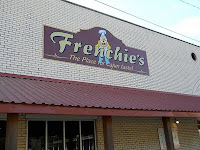 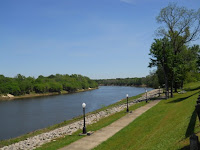 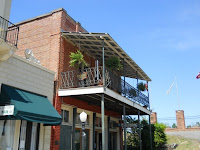 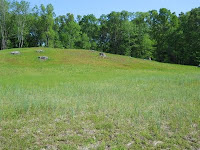 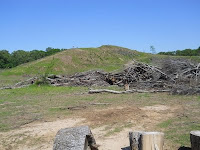 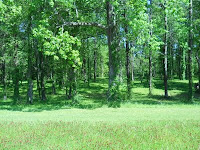 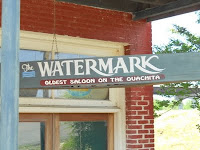 Pictures are referenced 1-A to 5-B, top left to bottom right. We left Poplar Bluff early to reach Poverty Point in time for the first tram tour. When we arrived just before 9:30, we found that the rides were preempted by a school group from Monroe. Just as well, we talked with the rangers and looked at all the exhibits, then took the driving tour of the site. If you're interested in pre-history, it's a cool place to visit, dating from 1500 BC! Pictures include one of the ridges (4-A), a smaller mound (3-A) and the large Bird Mound (4-B).

Then, it was on to Columbia, LA, which we learned about in William Least Heat-Moon's book Roads to Quoz. We visited the art gallery and had a beer at the Watermark Saloon (3-B & 5-B)- so called because of the watermark from a flood on the Ouachita (2-A).

Final en-route stop was Mamou, the "Cajun Music Capitol of the World." We ate supper at Frenchie's Restaurant (2-B), gumbo & a po-boy. Frenchie's is across the street from Fred's Lounge (1-A), which is the Cajun music equivalent of Preservation Hall. Next door to Frenchie's is a pocket park with bandstand & dance floor, and the mural of an old time Cajun wedding (1-B).

Tomorrow, it's Gueydan and on to Lake Charles for an informal get-together.
Posted by Bill Wayne at 7:54 PM No comments:

We left Warrensburg at 7:50 this AM, after dropping off Topsy & Cisco at the vet's for boarding and shots. Headed south on MO-13 to Springfield, then US-65 south for the rest of the day. No site-seeing, no photography, on a beautiful day.

Lunch was at the Dixie Cafe, Harrison AR. Great chicken fried steak - I had collard greens & Sandra had deep-fried corn on the cob. Both said "yum." Tonight we are in Poplar Bluff, with one of the saddest downtowns we've seen. Dinner was at a BBQ place called Rooster's; lesson - do not order beef in pulled pork country,

Tomorrow's highlights are Poverty Point State Historic Site near Epps, LA, a stop at an art gallery in Columbia LA, and dinner at Frenchy's in Mamou.