Today was our 35th Anniversary, so we revisited some places special to us.  Leaving Gallup, we drove 100 mi to Ship Rock, the Rock with Wings to the Dine'.  Pictures from several directions, including a pass high in the Chuska mountains, and we picked up rocks. 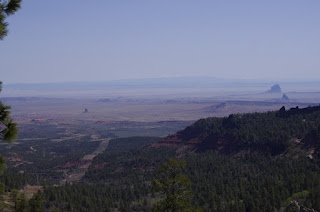 Then, it was on to Lukachukai (read report on our 2005, 2006 & 2007 trips at www.missouridaytrips.com) and a visit to the Totsoh Trading Post.  We visited with the owner/trader, who had a nice rug in our price range, so Bill bought it - Happy Anniversary, Sandra.  We went on to Canyon de Chelly, another magic place, and celebrated the hour of our wedding with a kiss overlooking Spider Rock - here's a picture to prove it: 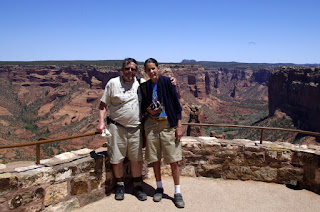 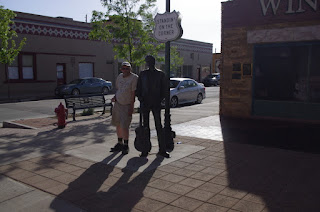 Next stop was Hubbell Trading Post NHS at Ganado, then back roads to Winslow - yes, we stood on a corner.  Staying at the grand old Harvey House hotel known as La Posada.  Up sometime in the AM & off to Tuba City, Page, Grand Staircase/Escalante and Kanab.  Today we drove 360.6 miles, 1733.2 for the trip.  Upped our mileage to 28.9 mpg, speed to 45 mph.
Posted by Bill Wayne at 11:03 PM No comments: 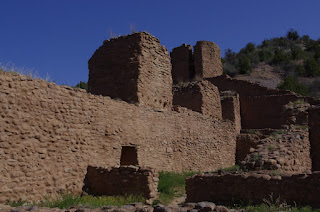 We were off at 6:30 in the AM (without breakfast) for places we've never been.  North on I-25 to Bernalillo, then NM-550 to San Ysidro.  Our intent was to get some good pictures in the Jemez valley, along with the ruins of the church Jemez State Monument.  We were early, so we continued up to the entry to the Valles Caldera, took some pictures, then headed back to the state monument.  Sandra couldn't find her Culture Pass, so I she didn't get any pictures - but Bill did.  We also toured the Jemez Pueblo visitor center, which was a very nice interpretation. 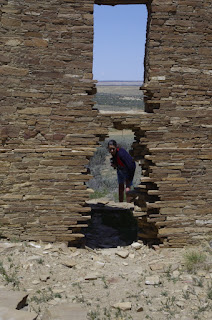 After this side  trip, we continued on 550 to  Cuba, where we enjoyed an excellent lunch at the Cuban Cafe - Sandra's green chile soup was special (& a bit hot).  On to the back roads looking for Pueblo Pintado.  This was an outlying site of the Chaco culture, connected to the canyon by a straight road.  It's an unmanned NPS site, so we were able to wander around & take photos.  Interestingly, the main surviving building ruins look a lot like the ruins of some of the churches at the pueblos.


Tomorrow is our 35th Anniversary.  We're heading north to Ship Rock, then thru the Chuska Mtns to Lukachukai & Totsoi trading post, then Chinle at Canyon de Chelly, and finally on to Winslow.
Posted by Bill Wayne at 9:16 PM No comments:

Slept in this AM & joined the other guests at Adobe Nido for breakfast.  One couple was going to Gathering of Nations today & had just returned from visiting much of Indian Country - we had a lot to converse about.  Breakfast was hot cakes, an unusual sausage, and lots of choices for juice, etc.  Then it was off to Old Town for visits to two of our favorite museums - the NM Museum of Natural History and the Albuquerque Museum of Art & History.  The art museum had a very interesting special exhibit of a series of prints by Goya commenting on conditions around 1800.  Much of the museum was closed for new construction.  At the natural history museum we visited our favorite dinosaurs, the asteroid strike display, the volcano & cave (& snatched a kiss in the dark), and jumped up and down to make the seismograph jump.

Lunch was at the Frontier Cafe, a local institution across from UNM.  Then we went to the Pueblo Cultural Center to see the new displays and watch the Spring Dances.  Then, back ot Old Town to sit on the Plaza and visit the shops - those on our postcard list watch for yours.  Dinner at Little Anitas and on back to Adobe Nido for some conversation. 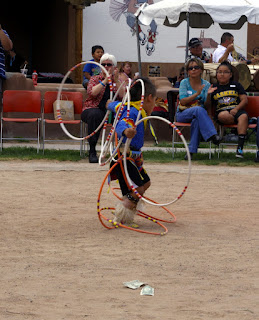 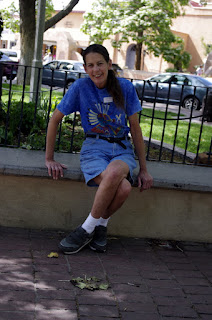 Tomorrow we're off early for Jemez, Cuba, Pueblo Pintado, and the night at Gallup.
Posted by Bill Wayne at 9:22 PM No comments:

The big event today - the Gathering of Nations Powwow, one of the largest in the country.  We saw license plates from Canada, Mexico and dozens of states.  Lines to enter were long, and the concourses in the "Pit" (UNM arena) were crowded.  We looked for a place to sit where we could get good pictures - where Bill liked, Sandra didn't - possibly because Bill had a telephoto & Sandra didn't.  The event started with the Grand Entry, right on time - no "Indian time" here.  Can you picture 3000 people, all in colorful regalia, trying to dance on a basketball court? 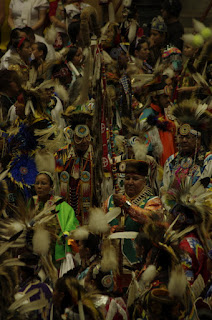 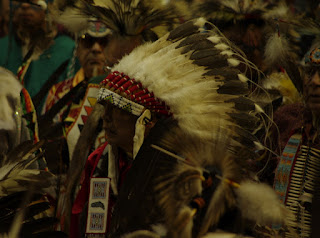 After the entry, the contests began with the senior dancers (55-69) dancing their specialties, followed by younger girls & boys, then the teens - all accompanied by pounding drums, well amplified, and the drum groups singing their traditional dance songs.  The songs mean a lot to the participants. 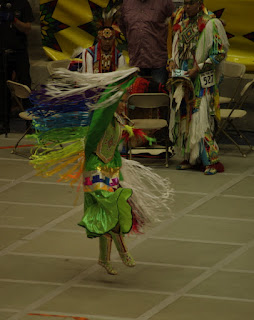 We saw men's & women's traditional, women's jingle & shawl dances, men's fancy feather and grass dances. Left about 3, went back to the B&B,  cleaned up a bit and went to join Larry Harrah for supper at Garcia's on Juan Tabo St.  Then, back to the B&B and process pictures & rest up for museums and old town tomorrow.
Posted by Bill Wayne at 9:33 PM No comments:

Day 3 of our trip.  We left Las Vegas at 7:30 and went south on I-35 to Pecos. where we stopped to see Pecos National Historic Site.  The displays at the visitor center include the history of Man in the SW, with a special section on the Battle of Glorieta, April 1862.  Took more pictures of the kiva and saw the church ruins, which we missed in '04. 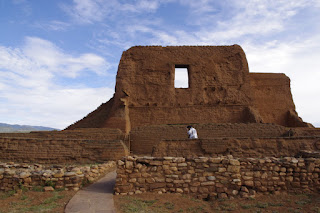 Then, it was on to Santa Fe.  Parking $10 (no feeding meters), 2 Culture Passes for $50, and it was off to see the museums - as usual, the state art museum was between exhibits, but the Museum of Folk Arts had a fabulous exhibit - you'll just have to go see it.  Split a blue taco order at the Shed, per tradition - yum - and sat on the plaza watching people. 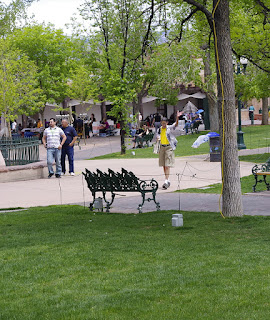 After 5 hours in Santa Fe we headed to Albuquerque in a strong wind and blowing dust.  Got in & settled at Adobe Nido B&B, then went with our hosts to Los Cuates, a very good restaurant.  I had blue corn enchiladas and Sandra tried a soft taco.


Tomorrow is Gathering of Nations Powwow, and seeing our friend Larry Harrah for dinner.
Posted by Bill Wayne at 9:53 PM No comments:

A good day of travel & sightseeing.  The area is having a record heat wave, rendering the warm clothes we packed "just in case" superfluous.  Left a decent (brand new) HIE in Guymon at 7:05 AM, CDT.  Took a break in Boise City, where we let a Navajo use our phone - his broke & the pay phones were all dead - found out he was from Gallup after we chatted some. 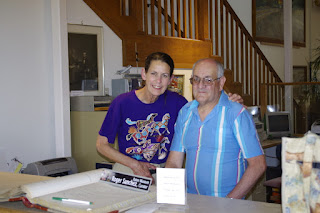 Then it was on to New Mexico, where it's suddenly an hour earlier.  Hit Raton about 9:30, took a picture to enter in the NM Centennial contest, then stopped at the fancy museum & talked with the curator/ramrod, Mr. Sanchez.  We split a green chile cheeseburger at El Matador (really a stuffed sopapilla) and were both stuffed.  Then, drove to to the NRA Whittington Center - I've been a member since 1966 & had never stopped.  Nice gun museum, and drove to see the skeet ranges. Took a picture of Sandra by a statue of Charlton Heston as "The Scout." 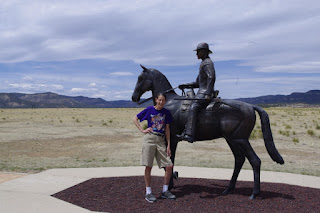 On the road again, again to someplace we'd never been - Ft. Union, a NPS site.  It was an adobe fort, and remains in restored ruins.  It was big.  Took more pictures for the contest - hope I got the right one since I haven't figured how to load pics onto the cell phone from the web.

Final stop is Las Vegas (New Mexico), where we're staying at the HIE in a king suite room.  Drove around trying to get pictures for the contest, and had dinner at the El Rialto in old town - green/red chile enchiladas w/ posole.  Stuffed again.  Food good, service indifferent.

Got an early start, 0621, and headed for Holden.  Stopped for donuts at Casey's there, and on to Kansas via MO-131, MO-2 & KS-68.  We hit our usual stop outside Ottawa, then on to Cottonwood Falls & Chase County.  They've added a local art gallery and a gift store for the Symphony on the Prairie.  Stopped for lunch at the Whistle Stop Cafe in Walton, KS (east of Newton) and we'd recommend it - good food (I had a hot hamburger sandwich - yum), good service, decent decor and located right on US-54..
We drove thru Greensburg, which continues to rebuild after the tornado several years ago.  It has a new city hall, community center, Family Dollar, school, museum for the hand-dug well, and lots of new houses.

Then, it was on to Liberal for supper at the Cattlemans Cafe, except we had a detour due to a wreck near Plains, KS - they sent us miles out of our way.  Supper, as usual, was excellent - country cooking!

Watch this blog starting in about 10 days - we'll be posting from the Santa Fe, the Gathering of Nations Pow-Wow, Gallup, Winslow (standing on the corner), Zion NP, the Little Ale-e-Inn bar, the Libertarian Convention in Vegas, Tombstone, and who knows where else.
Posted by Bill Wayne at 8:08 PM No comments: