Every Labor Day, the Catholic Church in Montrose, Missouri, has a cḥicken dinner, served family style in the basement of the school building.   We've been attending for years, ever since it was held out at St. Ludgers in Germantown (a place with much Civil War history).  For $10, we got fried chicken, mashed potatoes & gravy, stuffing, green beans, cole slaw, a slice of pie, and iced tea.  This is a popular event, and attendees can spend quite some time in the church sanctuary awaiting their number to be called.  A couple of years ago, we figured something out - arrive early, buy the tickets, than take a gallivant through the countryside.  This is the story of this year's gallivant, with emphasis on the plight of certain small towns.   If you want to follow along, get out your map.

We left  about 8:30, got a  cinnamon roll and a Pepsi in Warrensburg, and headed out via BB, SW 200 Rd, MO-58, O, MO-2 and N for our first stop, Blairstown.   This town is much deteriorated from the days when the Wall Store was the largest gun and reloading supplies dealer in this part of Missouri.  Even the buildings that once housed the store are gone.  We took pictures: 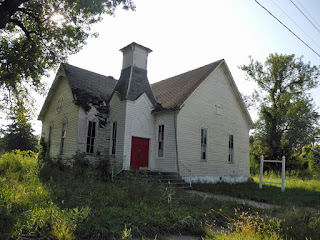 An abandoned church in Blairstown, no sign of its original denomination. 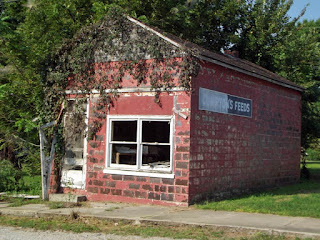 The feed store, being taken over by vines. 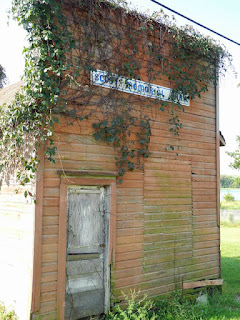 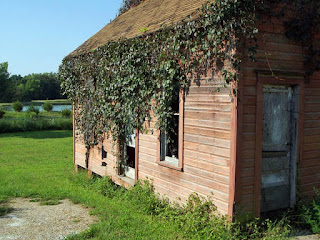 The park building, another view.  At least the grass was mowed.

From Blairstown, we headed out on N west to B, B south to Urich, then K south to H, H east to Montrose, where we bought our dinner tickets.  Then it was MO-52 south to A, then H south , crossed the Osage at Taberville, and west on Y.  We turned north on AA to Schell City.  The houses here seem well-kept, but the business district is essentially vacant.  Again, we took pictures: 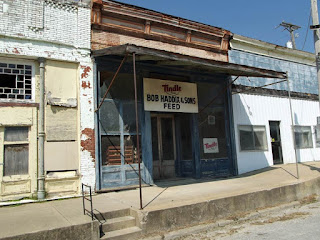 Part of the old business row in Schell City 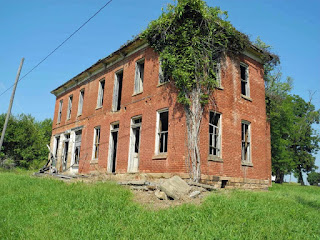 A large building, abandoned and waiting for the vines to engulf it 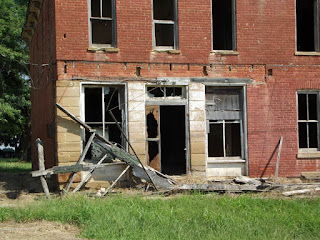 Close-up of the large building.  At first I thought it may have been a school, but now I think it was a hotel with businesses on the bottom floor. 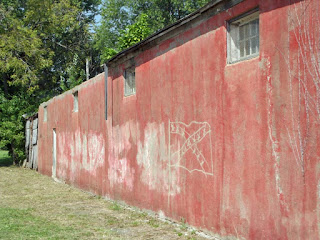 Another collapsing building.  Most of the wall graffiti is gone, but for this scratched-in battle flag. 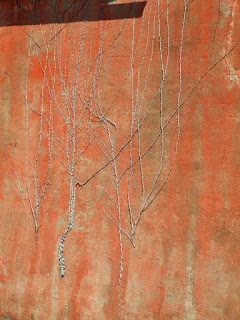 Vines made an interesting pattern on the building wall


Left Schell City heading for Appleton City via M north to B, east to W, and north to MO-52.  Appleton City seems to be surviving moderately well as an Ag center.  After a comfort break, it was on to Montrose for that excellent chicken dinner.

Well-stuffed, we headed east on MO-52 to Deepwater.  En route we passed this icon of  the people's distaste for their rulers: 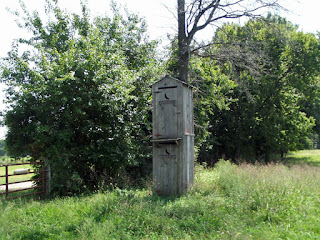 If you can't see it, the upper level says "politicians"and the bottom, "voters"


Deepwater is another small town that has seen better days.  The old school is abandoned and partially falling in.  The Labor Day picnic was just about over, with the dunk tank the only visible activity.  We took some pictures of the school: 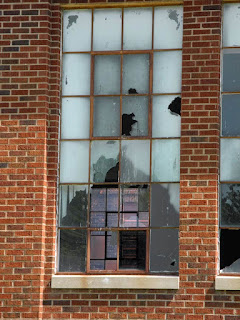 Broken windows in the school gym 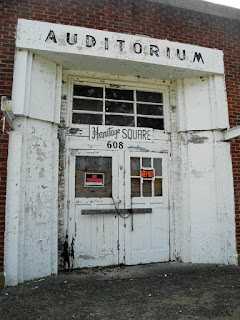 
North on MO-13 to Clinton, where we avoided the long waits at the the stoplights (it always backs up as folks head home to KC after a weekend at the lakes).  While we'd seen several Confederate Battle Flags earlier, this Rebel took things a bit farther, guarding it with small statues on his door step. 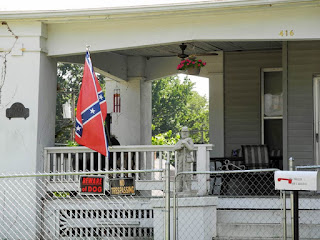 Look carefully, there's a statue visible near the end of the porch.

Posted by Bill Wayne at 9:17 AM No comments: