339.7 miles on the day, 1589.9 for the trip.  Tomorrow to home, about 240 miles. Nothing doing, just driving on roads with traffic. Looking forward to getting home. I'll catch up the C&T pictures eventually.
Posted by Bill Wayne at 6:09 PM No comments:

Up about 5, messed around until breakfast, and headed for Antonito about 8.  Picked up our tickes, bought a t-shirt and took a whole bunch of pictures - which I'll add tomorrow.  It's late, more stories when we get around to it.

We were up really early, which allowed Bill to again replan the last part of the trip.  We won't return to Santa Fe & will skip Albuquerque. So we'll be home Wednesday.

Left Santa Fe at 7:15, and took the bypass to miss all the congestion expected for the big Sunday parade. On our way out on Airport Rd, we saw a gold spire - a Buddhist Temple.  Once we hit the main road,  every concrete abutment & such had the stylized figure of an animal - frogs, deer, quail, lizards, crows, turkeys, roadrunner eating a rattler, etc.

Among other interesting sights: La Pistoleras Cultural Inst, Taos - took a moment to realize this is feminine. An old tanker truck with "RISE UP" painted on its sides,  The Crazy Beaver Bar & Grill in Costillos.

We cut off of NM-68 at Pilar and drove down along the river. It was muddy from rains the night before, which made the rapids look like foamy chocolate milk. 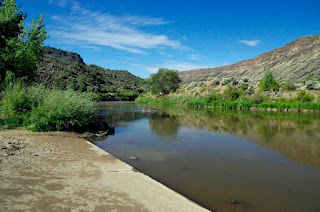 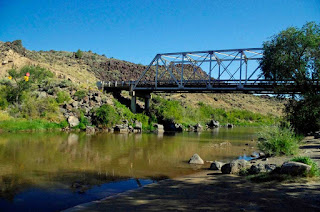 We crossed the bridge and climbed the switchbacks to the west rim - boy that river looks small! 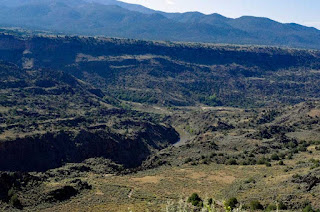 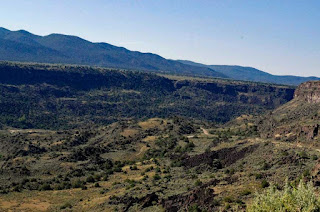 We then followed the rim road to US-64 and crossed back into Taos itself.  A little walk around the Plaza, visits to I Love Taos t-shirt shop and op cit books, and it was time for lunch at El Taoseno. This is primarily a locals restaurant, with a sprinkling of  knowledgeable or lucky tourists.  Their 'green' is both tasty and hot. 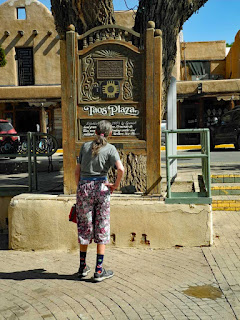 Pulled out of Las Vegas about 8 AM for the 60 scenic miles to Santa Fe.  Buttes, mesas, mountains, a canyon & a CW battlefield - we didn't stop at any, sine we wanted to spend some quiet early time at the Plaza.  We came in on Old Pecos Road to Paseo Peralta and wondered why so many people were walking toward the Plaza.  Oops - why didn't we know this was Fiesta Santa Fe weekend, a major regional event.  Regular streets & parking lots were closed off.  We found a $10 parking place that had the advantage of shade and the disadvantage of a long walk.

Now, about that walk: As we followed the crowd, we passed a statue. Sandra exclaimed "Old Drum!"  Judge for yourself: 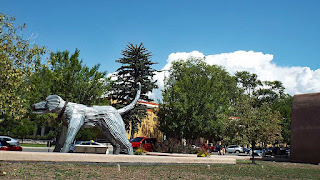 That was an appropriate sculpture, as today was the annual Pet Parade.  We caught the tail end of it. 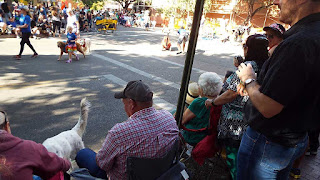 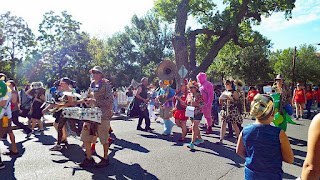 Found our way to the Plaza area. Talk about a crowd!  Vendors of all sorts all around the place; no relaxation there. 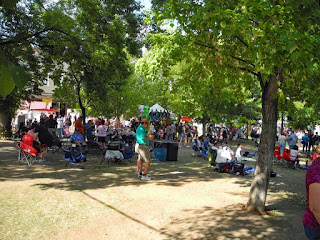 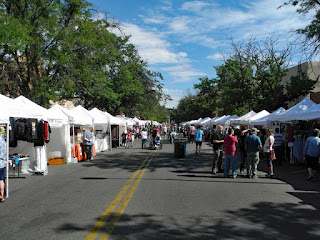 We wandered around killing some time until The Shed opened at 11 for our traditional lunch - turns out they opened early for the big events. 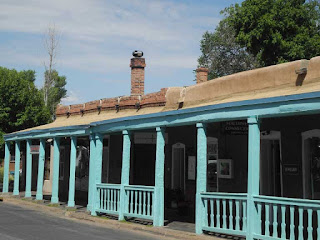 After lunch we visited the IAIA museum and saw some very interesting exhibits, some relating to a theme of reconciliation.

We sprung for the Culture Pass, but visited only one museum, the NM Art Museum.  Great exhibit on Glen Canyon dam and Lake Powell. 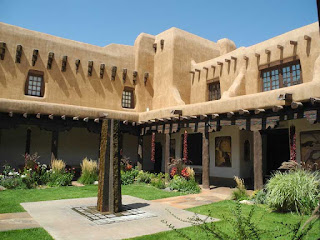 Checked in at the Best Western Plus hotel, relaxed a bit, then went for dinner at Tortilla Flats- Sandra had Frito Pie and Bill voted for a bowl of green chile. Bought some local craft beer and just getting   cameras ready for tomorrow.

Highlights of the day: Green! and Family

We left Dodge City at 7:30 AM, headed for New Mexico on US-56, roughly following the Cimarron Cutoff of the Santa Fe Trail. This was mostly Llano Estacado country, without many natural landmarks. It's oil country, and center pivot irrigation, as well.  Near Moscow KS, a number of large stacks of alfalfa big bales were collapsing - lots of wasted production.  Elkhart, our last KS town, featured a family of oil pumps in 5 different sizes, all in desert pink.

Our first real landmark was seen from Oklahoma, Rabbit Ears Mountain, a promise of varied terrain.  Clayton NM is the home of this landmark, and also a nearby dino trackway, the latter celebrated by the local Chamber with three old, green taildragger statues. 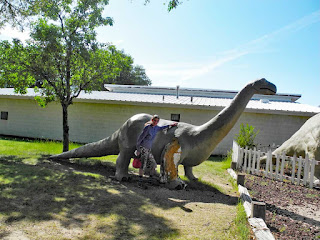 From here on, US-56 was mostly empty and parts lined by snow fences; the 60 mph speed limit is a joke.  Gladstone has a single store, a tractor crossing sign, and a sign about hte Goodnight-Loving trail crossing.  Further on we saw a couple  of pipe saguaros (not native to NM). Taylor Springs is where the dry route found a fairly level crossing of the Canadian River.

56 ends at Springer, NM, home of Elida's Cafe and some really great posole (green).  After lunch we headed south on I-25 at about 70 mph, under the speed limit. Got to Las Vegas about 1:30 MDT, checked in at the HIE, and called Sandra's Uncle Murray.  We had a nice visit with his son and extended family, exchanged email & FB info, had dinner at Pino's (big servings, posole disappointing).  Pictures to follow. 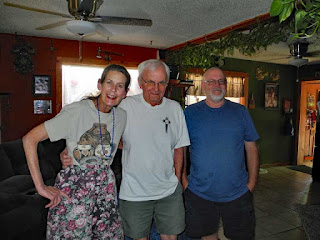 MO-131: the  old schoolhouse has a new partial coat of paint

MO-2: Infinity Farm, just west of MO131. Wonder what they farm.
Interesting road names, but we know what Old Drum Road means. Blinker Light Rd has a....
Harrisonville has the Twice as Nice Thrift Store and the Burnt District Monument.
Was there a college on Brush College Road? If so, what did it teach?
Just west of Freeman, the Morristown site had a CW battle in Sep. 1861.
Good Times Classics (cars) are found at Westline.

KS-68: KDOT decided to do some maintenance in front of Cedar Cove Feline Sanctuary (for BIG cats) - without posting it on their website.
Saw our first oil wells west of K-33, with a silo tree nearby.
A big silo tree resides about a mile east of the Ottawa WM distribution warehouse.

I-35: A good road, little traffic. Yay!
Emporia's Commercial Street Cafe is good and reasonably priced. Took a bit longer to eat, since the lady at the next table was a New Mexico native,  Had to talk a bit.

US-50, all 220+ miles of it:  Into the Flint Hills but no time to stop at Cottonwood Falls or the Prairie Preserve.
Clover Creek Ranch B&B looks prosperous - white fences and red roofs.
A mixed freight train must have derailed a bit east of Newton, based on the residue we saw, includinh scattered hcontainers.
Gas in Newton was $2.19 so we topped off - best price since leaving the Burg.
What is Pete's Puddle? If you guessed pay fishing lake, you're right.
We saw at least three of those big windmill blades, all heading east.
What is that Union Jack doing painted on the side of a barn near Stafford?
Meeksville has The Jerk Rope. Your guess is as good as mine (or better).
A lot of center pivot fields in the Lewis area, including All Star Alfalfa - that's a high-value crop.
Spearville bills itself as the "Home of Windmills and Royal Lancers," the former for the huge windfarm surrounding the town.  The latter? Most likely a team, but one could imagine people intent on tilting with the windmills.
As you come into Dodge City, you'll be greeted by a sign with a lot of steel cowboys on top.
The Bud distributor here has a mural with an old time engine and an "in without knocking" scene.
Wyatt Earp has a couple of statues, but a number of establishment names aremore "Gunsmoke" related.

Posted by Bill Wayne at 8:25 PM No comments:

After a great lunch at Lange's Cafe in Pipestone, Sandra had a sudden attack of heat and wanted to head home immediately.  So we pulled out without visiting the park, cancelled our reservation at Cherokee, and headed out on US-59 (speed limit 55, like even the best 2-lanes in Iowa).

We passed through Cherokee about 3 PM, figuring we had about over 312 miles to go.  Turns out that a bit of a calculation mistake on the spreadsheet dropped about 80 miles.  We finally got in at 10:30, after 721 miles and 15 hours.  Bill's glad he can still do that kind of driving when needed, but doesn't want to practice it.

We saw lots of possible tidbits, such as Ida Grove, the town that has a castle theme in its architecture, but didn't have time to write much down.