Took off at 0640, and headed south on AR-9. Passing the Arkansas Yam Company in downtown Malvern. A bit further south, there came Infinity Ranch and The Hangout – Home of Hippy Holler.

Turned on AR-8 to Fordyce, home of the Redbugs – and the Lady Bugs salon. It's also legendary 'Bama coach Bear Bryant's birthplace. Left Fordyce for a little trip to Marks Mill battlefield park. Not much there, a little roadside park and some interpretive signs of this 1864 disaster for the Feds. 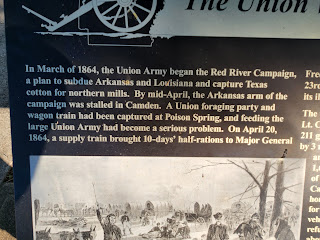 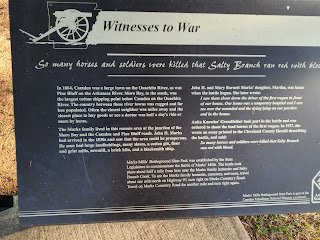 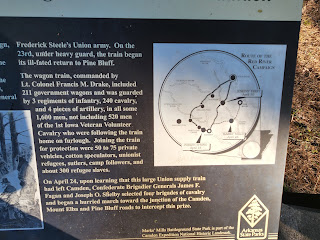 After a short stop, it was back to Fordyce to pick up US-79 south to Camden. A little 25 mile roaund trip to me to Poison Springs Battlefield State Park. This is a nice park with a nature trail; it has only one sign commemorating the battle. 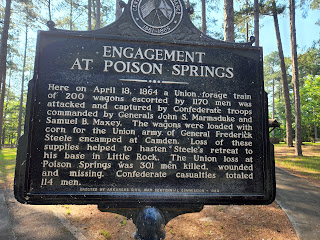 Driving thru Camden, I passed a street of classic old houses in Colonial, Queen Anne, and Georgian styles. I continued south on US-79 (I was supposed to be on AR-7). I discovered the mistake when I realized that I was in Magnolia, not El Dorado as planned. Well, it was going the right direction, so I continued on, stopping at Emerson, the purple pea capital and home of the world Championship Rotary Tiller Race, to check GPS – I somehow did not include a Louisiana map in my travel kit. Haynesville, LA, claiming to be the Gateway to North Louisiana, is home of the Golden Tornadoes, multi time state football champs.

At Homer, the manager of a C-store told me to get on LA-9 south and it will take me where I want to go. She was right. I came out at Grand Ecore, across the Red River from Natchitoches. The historic downtown dates from French colonial time; mansions from that and more recent eras provide plenty of B&B lodging for tourists and visitors to Louisiana Tech.