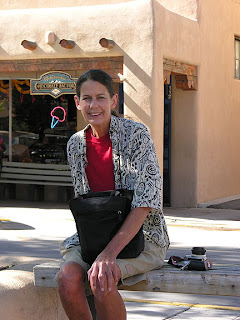 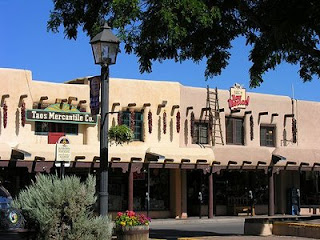 A long day, today. En route to Taos we stopped at an overlook for the Rio Grande gorge bridge outside of Taos. Then we walked around, bought t-shirts, sat on the plaza & looked at art. Then it was up the hill, down the hill, up the hill and down again to Cimarron, where we visited the museum at the Philmont Boy Scout ranch. We had been reading about Lucien Maxwell who put the whole property together in the 19th Century, then the area of the ranch ended up under the ownership of Waite Phillips (same guy whose Tulsa house is the Philpott Art Museum). Yes, he was the brother of the man who started Phillips Petroleum and an oilman in his own right.

Drove through a lot of empty space - not a single town for over 90 miles from Springer & Clayton, and not many between there and Guymon. We did run through the edge of a thunderstorm - yes, the 4-cyl Malibu runs easily at 85 mph on level ground as we tried to get through the hail we were caught in. One dent in the roof. Damn!

Tomorrow, who knows. We may drive straight through home, or we may take an extra day. Depends a lot on how I feel in the AM.
Posted by Bill Wayne at 9:11 PM