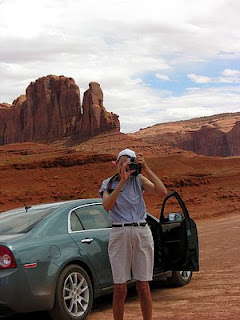 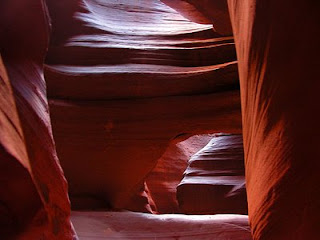 Gee, I'm not posting this until Wednesday evening - the motel in Mexican Hat had very limited bandwidth, hard to even check email. At Page, we took a Navajo-guidedd tour of Antelope Canyon slot canyons, really something. Needed more time and a better tripod to take really sharp, focused pictures. We rode in a contraption with 11 other people in the back of a pickup truck, which turned into a really bumpy ride; Sandra loved it. The big excitement was a baby rattler in the canyon.

Then, it was off to Monument Vally. We stopped in Kayenta at the Blue Cup (I think) for a Navajo Taco, really outstanding. When we got to Monument Valley, a Navajo woman offered us a tour of the back country for $65/person. No thanks, we'll drive the open area ourselves (maybe I should have offered her half that). It was definitely picture time, trying to get better versions of what we took in 2004. We met some folks from Germany who were on the same trip as us, as well as a Navajo who was originally from the Lukachukai area & knew the people at the trading post whom we met on previous trips (& whose daughter waited on us at a casino buffet near Phoenix). Small world revisited.

Spent the night at Mexican Hat Motel, in Mexican Hat (naturally). It overlooked the San Juan River gorge, which we could have walked down to if we hadn't been worn out from previous adventures. The only drawback was the terrible bandwidth problem; they were on dish which can't handle the kind of traffic they had. Dinner? A Navajo taco.
Posted by Bill Wayne at 9:31 PM