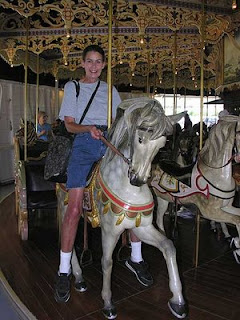 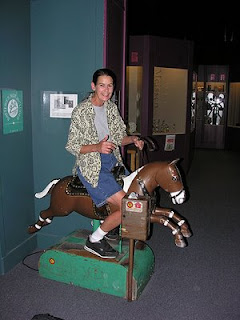 Left Hays at 7:30 AM CDT and drove to Oakley KS. Its claims to fame are the Fick Fossil Museum and Buffalo Bill. The Fick is a typical local museum enhanced by a good collection of local marine fossils. Mrs. Fick 'painted' scenes using fossil shark teeth. There's a big statue of Buffalo Bill shooting a bison, based on the fact this is where he won a buffalo-shooting with another claimant to the name.

Then it was on to Colby, where another couple had collected a massive number of things - call them eclectic collectors - china, dolls, dresses, toys, and more than I can count. Sandra had a ride on the mechanical pony that once stood outside the local grocery store, a ride on merry-go-round, and an abbreviated game of hopscotch.

Next stop was the Kit Carson County Carousel in Burlington CO. Wow! Hand carved and painted animals from the early 20th Century and a mechanical organ. It works. On our second (yes second) ride, the background music was "Dixie" and I rode a dapple gray I immediately dubbed "Traveler" - Sandra rode a paint.

Took some back roads to Loveland rather than going thru Denver & fighting I-70/25. Got here at 5 PM MDT. It was mid-nineties and didn't feel particularly hot. The HIE has a water slide in the pool - what fun!

Two good Mexican meals today. Tanking up on the good stuff. Tomorrow is Rocky Mountain National Park, with a stay across the mountains at Craig. 411 miles today, 776 total, and we're getting about 30 MPG. Gas prices are close to $2.50 here. I'll watch the sunset behind the mountains & sign off for today.
Posted by Bill Wayne at 9:34 PM