Woke up about 4, and never got back to sleep. I wanted to leave as early as possible, since US-70 was closed by a flash flood between White Sands and Las Cruces and the detour would add 80+ miles to the day. When I checked the New Mexico road site – it's a miracle, the road is back open. As I found later when driving thru the area, it was indeed a miracle. The roadside was piled with sand, cactus and yucca washed out by water cascading off the mountains.

The Holiday Inn Express was absolutely first rate. Everything worked – it was fully updated and they served the standard HIE breakfast. I hit the road at 0630, heading southwest on US-54, with a long container train climbing the ridge to the west. The road crosses a series of ridges, rendering cruise control ineffective for fuel saving. This was short grass range land, light colored soil and juniper trees. A snow fence ran along the northeast side of the highway, a tribute to high-altitude winter.

A trailer/RV park in Pastura, the first town along the road, includes a repurposed railroad passenger car. Cholla cactus is now more prevalent than juniper. The roadside low spots have standing water; the monsoon season has been good to New Mexico for a change. Vaughn is a major crossroads – 3 hiways cross here, as do BNSF and U.P. Tracks. Non-chain motels are holding on, but many cafes are for sale. I can see mountains to the west.

Duran hosts a wind farm, apparently still under development since the blades were not turning. Yes, indeed, I had to sit for a while as a convoy of windmill parts took over the roadway. When they finally turned off, I'd lost about 20-25 minutes following them. Mountains are closing in from both sides of the road when I reach Corona, elev. 6700. These are smaller volcanic mountains; in the distant haze caused by western fires I can see significant ranges to both sides. The state is rebuilding the narrow highway here, converting it to modern 2-lane with shoulders and passing lanes – 6 miles of orange barrels slow things down. 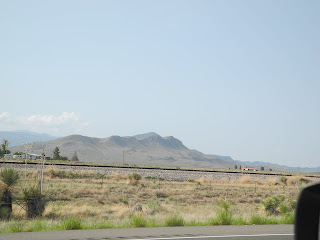 Carrizozo, my first rest stop, was one of Sandra's favorite places. I passed a couple of ruined Evergreen containers by track side; did a train get sidewise there (a la Suez Canal), or are they crosswind casualties? Along with the painted burros and other artistic endeavors, such as the Heart of the Raven art classes, a sign reads , “New Mexico – home of the Q-ANON lizard people.” 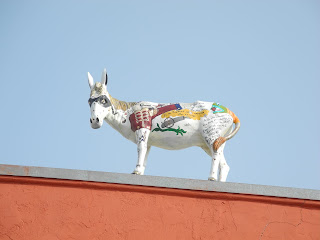 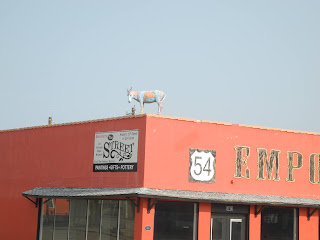 I'm now running along the foothills, mountains to the east and the Tularosa Basin to the west. I can see the black of lava flows, succeeded by fields, and eventually by white sand. I pass the entrance to Three Rivers Petroglyphs, a BLM-managed lava ridge long used by native people. A convoy of wind turbine blades passes by heading northward. There's the first pistachio grove and the Tulie MX racetrack. Tularosa has a Tulie Freeze. Between Tularosa and Alamogordo, there's the world's largest pistachio nut (Missourians have the world's largest pecan, at Brunswick) and Bowlin's Running Indian trading post (read tourist trap). Alamogordo has a toy train depot at the train museum in the park.

Sandra loved White Sands for the photo ops it offered, as well as the chance to be a kid and play in the sand. I lathered on the sunscreen and braved the considerable heat to take pictures. 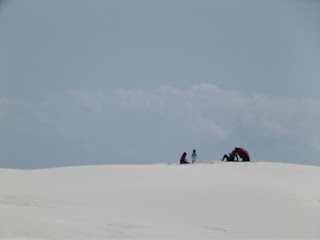 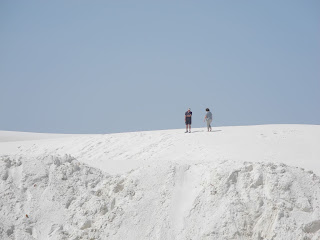 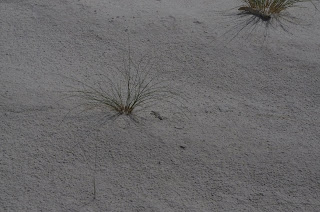 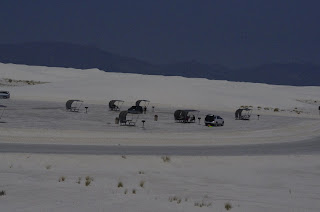 After White Sands, one passes the Border Patrol checkpoint (which I'll have to go thru on Thursday). The flooded area came next, eliciting a chorus of Wows! Each debris pile was more impressive than its predecessor.

Arrived in Las Cruces about 12:30, dropped off 9 boxes of books at COAS bookstore, giving me $150+ of credit toward buying more books. Checked into my Holiday Inn Express to cool off and plan to meet Sandra's Uncle Murray after 4 PM.

Met Uncle Murray about 5. The first place we tried is open lunchtime only, so we went to Village Inn. They had a halfway decent green sauce on their enchiladas, so it was OK. Went back to his apartment and chatted. He'll be 90 next month. Tomorrow we do some book shopping, have a couple of good meals, and swap stories some more. 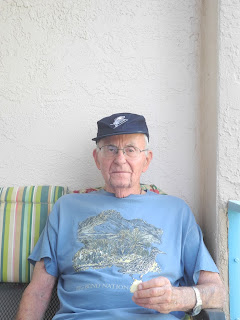 Tomorrow it's around Las Cruces