Didn't get to bed quite as early as I'd hoped yesterday – TV had some Looney Tunes on. Got up about 5:30 and was packed and loaded by the time motel breakfast started at 6:15, Off and rolling at 6:41, heading north on I-25. Said “goodbye” to the Sangre de Cristos, as I drove through the unusually green prairie countryside with pools of recent rain water. The road was a bit rough in spots – I've noticed that New Mexico road surfaces seem to deteriorate by losing tiny bits of their surface, leaving a feeling similar to a slightly uneven gravel road.

Exited onto NM-120 at Wagon Mound (elev. 6201), named after the Santa Fe Trail landmark butte that, from a distance, resembled a wagon with 2 yoke of oxen. It was about a day's travel from Ft. Union. See what you think: 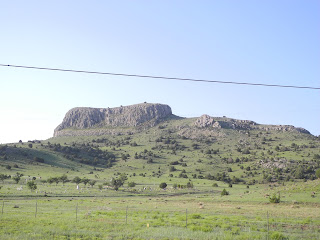 Temperature is 64, and many small birds scared up off the asphalt road as I drove through. I managed to miss these, although a couple of others further on weren't so lucky. I was surprised to still have 4 bars cell service well away from the interstate – possibly because towers are placed on high mesas and there are few trees to block line-of-sight. It didn't last long, unfortunately.

The Canadian River cuts a spectacular gorge through the high plains. It's a tributary of the Arkansas River, rising in the Sangre de Cristos. One of its tributaries is the “wet” Cimarron, and the Cimarron cut-off of the Santa Fe Trail crossed it further north, near Springer. I took a few pictures: 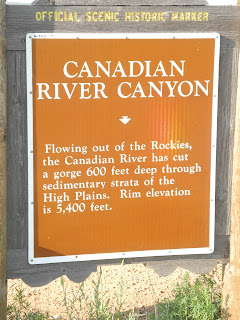 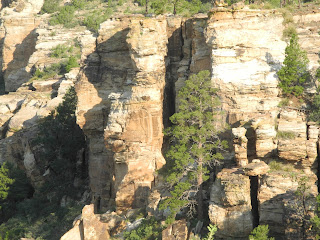 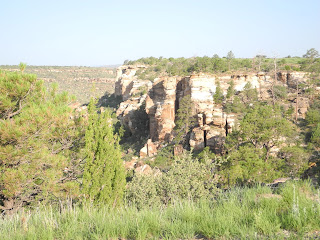 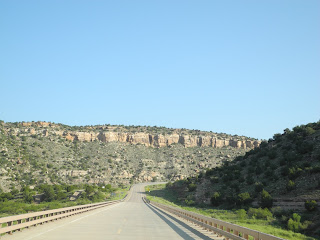 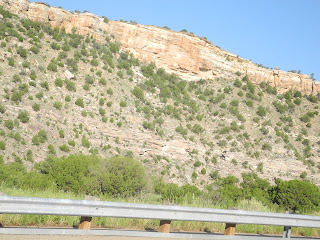 On the way out of the gorge en route to Roy, I saw a modern variation of traditional graffiti: “Ernie (heart) Carlos.” Roy (elev 5896) is a small crossroads town, notable for being the place where Bob Wills developed his style of music: 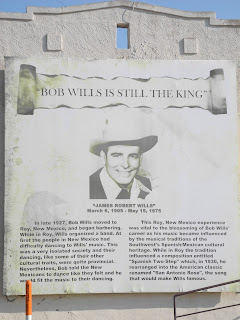 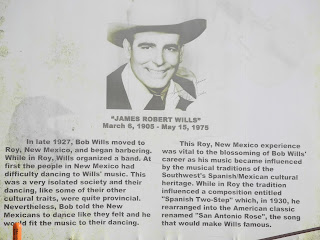 Just out of Roy, I saw a little bit of folk art – a traditional little green man standing in front of a miniature space capsule. This 40+ mile stretch of NM-120 has enough traffic that its center is not yet overgrown by plants invading from the shoulders and narrowing the lanes. There are only a few large ranches along the way, plus a nice sampling of deserted homesteads: 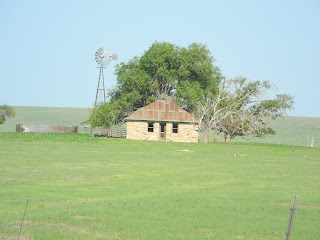 I finally reached US-56, which isn't particularly busy, either. Some sections have a double snow fence on their north side. I think Sandra would have napped through this stretch. One old building had a drawing of a skeletal animal – reminded me of fossils. Clayton (elev. 5050), is the last town in New Mexico, and it's had less rain, judging by the pastures. One thing struck me about some farms seen against a far horizon – they looked like frontier forts, with tall grain bins serving as blockhouses.

The last 9 miles from Clayton to the Oklahoma line took an hour 13 – not really, I'd just moved from MDT to CDT. Stopped at Boise City (elev. 4167) for gas at $1.75. Crossed into Kansas at 12 noon at Elkhart. Between there and Rolla, I saw a figure made of pipes holding up a big bale – think Atlas holding up the world. Hugoton, KS, has a Shady Lane B&B (hey, I can't help myself – after 28 years in the business, I notice B&Bs).

If anyone's looking to plant or grind some wheat, you can find all you need growing along the roadsides in western Kansas. Near Moscow, KS, large stacks of rotting square big bales are collapsing. The other Cimarron (aka 'dry') River crosses US-56 between Moscow and Satanta -yep, it was bone dry. Satanta, named for a Kiowa chief, has a concrete tepee in a park and a White Bear Inn. [Aside: Sandra & I have driven through both Satanta, OK, and Quanah, TX, and have seen the graves of both noted warriors on Chiefs Hill at Fort Sill.]

Sublette, named for the famed mountain man and guide, is the original home of one of our favorite restaurants, Cattleman's Cafe. I stopped for an outstanding chicken fried steak. Going into Montezuma, I passed a feed yard that stretched for a mile along the hiway. All Montezuma's streets have Spanish names. Their team is the South Gray (county) Rebels, with a logo of a soldier waving a saber – wearing a blue uniform.

Got to Dodge City a bit before 3 PM and checked into a new and modern Holiday Inn Express. No supper, lunch was too good.