Took off at 0645, found Murphy's Express for gas at $3.91 and wandered thru town looking for I-25. Only took ½ hour. Finally on the road heading north through pretty consistent desert country, passing 4 cars parked in the wide median, no persons around. Hit a couple of unexpected work zones, including a complete rebuild of the highway between Rincon & Hatch (Hatch, home of the best chiles in New Mexico). Passed a sign saying next exit: Derry Arrey. Turns out that they're two separate places close to the Rio Grande; here I thought it was a single town in the backside of nowhere.

I-25 crosses the not so grand Rio Grande at mile marker (mm) 58. Next come TorC and Elephant Butte. I pass signs for Spaceport of America, Jornada del Muerta, Fort Craig ruins, and Bosque del Apache NWR. I'm tired – you can look 'em up.

Comfort break at Socorro, where gas starts at $4.24. I now head west on US-60 (yeah, the same road that runs across southern Missouri). The sun breaks through the clouds on the mountains & yellow grasslands.

First stop is Magdalena, at 6,548 feet, a small town recently featured in New Mexico Magazine. Its roots rise from miners and cowboys; now it's artsy. The trading post/info center's host will talk your ears off. 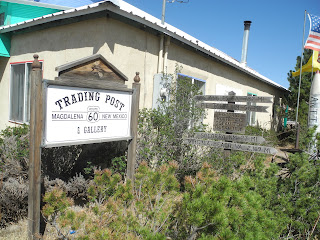 The road goes through another pass and emerges on the Plain of San Augustin, the relic of a large long-ago lake and home of the Very Large Array (elev. 7030'), a series of radiotelescopes moved around by rail. The visitor center was closed, so I had to settle for some photos. 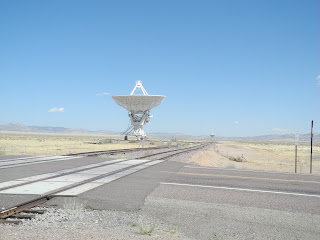 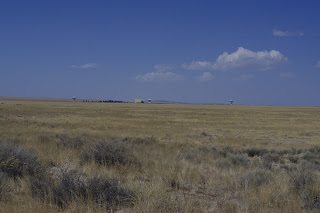 Broad view of the plain and array HQ

I press on westward. The Cibola National Forest has the usual pinons and junipers, plus a few Ponderosas. Most of the hills & mountains I pass through are of volcanic origin. The altitude at the Continental Divide, just east of Pie Town, is 7,796.

I'd hoped for lunch and some New Mexico Apple Pie at Pie Town. That was not to be. Everything is closed down; the cafe where we ate on a previous visit is for sale as a home. 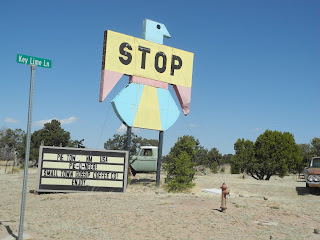 
I turn off on NM-603, an unpaved short cut that I hope proves scenic. It does, after a fashion I see a couple of big ranches, many trees and cattle guards, one longhorn, and only 3 other vehicles on the 22 mile drive. 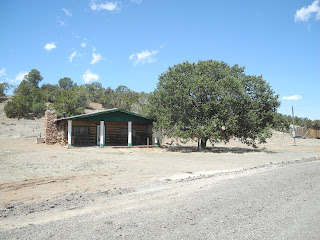 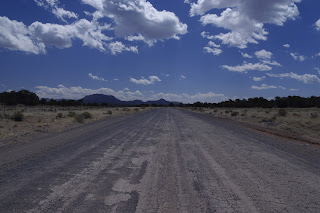 Now on paved NM-36, I see the first prairie dog of the trip, skedaddling across the road. Then it's a long drive on NM-36 & NM-602, ignoring their ridiculously low 55 MPH speed limit, to Gallup, where I overpaid for an oil change. Lunch at Earl's was tasteless; supper at Don Diego's was excellent. I drove around & took a few pictures, marveled at the number of people wanting to donate $ to the Nation at the Navajo casino, then settled in on the 4th floor of this HIE. 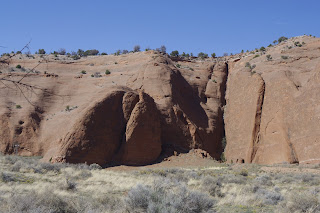 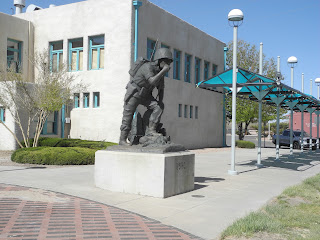