Woke up a bit early so got to an early start, 0639. US-550 is a 4-lane, undivided, highway through mostly desert country. But, like that other desert country where we've spent 20 years changing regimes, it has oil. Occasional oil wells near Bloomfield, but from Nageezi south, oil infrastructure is all over the place. Nageezi is also the turnoff to Chaco – which brings me to a couple of signs placed by someone(s) who disapprove of all the drilling: “Violence against land is violence against us” and “We are greater Chaco.”

I drove through a corner of the Jicarilla Apache reservation, complete with casino. Then came the Continental Divide, elev. 7350, at mile marker 76. This was my 8th crossing of the divide over 3 days. Drove through Cuba and the badlands south of it. Near the Rio Puerco, the road is bordered by high fences to push wildlife to a few secure crossing spots. The road runs parallel to the Jemez Mountains; at San Isidro NM-4 takes you into their heart. I continued to Bernalillo, where gas prices were a tad under $4/gal.

I-25 to Santa Fe is a race track, as drivers act like the 75 mph limit is a minimum. I drive more conservatively to get better gas mileage. Hit Santa Fe about 0945 and headed downtown. A quick tour of art on display at the Museum of the American Indian Arts Institute, this time focusing on the damage to indigenous cultures from uranium mining and bomb testing.

Then it was time for lunch at The Shed. Sandra & I discovered this popular cafe in 2005 and have eaten lunch there every time we've been in Santa Fe. I even got our favorite table, and took the picture I've always taken, only this time her chair was empty. 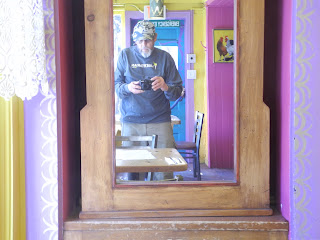 Past photos showed Sandra smiling at me from the chair, while I was reflected in the mirror


I sat on a bench in the Plaza, as she always liked to do, bought something at the dime store, and found my way out to the Taos highway. I left the main road at Pilar and followed a riverside road to the bridge we liked to photograph. Found my way to the Taos plaza, and visited a book store and our favorite t-shirt shop. Oh, Horrors! My favorite restaurant, El Taoseno, is closed. I ate at Casa de Valdez, where the food wasn't as spicy as I remembered, but the service was just as bad. 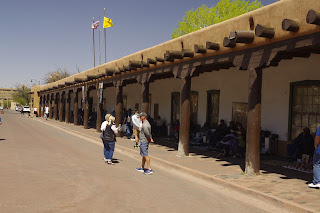 Palace of the Governors, Santa Fe 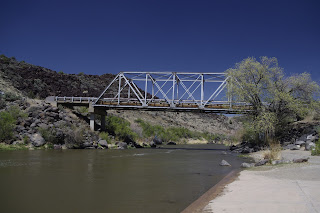 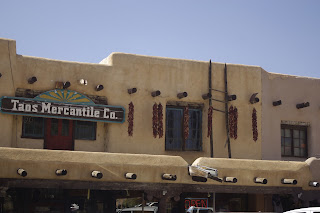 From the Taos plaza


I'm staying in an older chain motel, a Quality Inn. A bit short on outlets and the A/C is a bit small for the room, but I backed right up to the door!

Tomorrow, April 30th, our 45th Anniversary. I will visit the NM Vietnam Memorial, stop and chat at the Raton Museum, and (if I'm up to it) climb Capulin Volcano, where we once celebrated an anniversary, & have dinner in Liberal. Roads for tomorrow: US-64 & US-54.