Today would have been our 45th Anniversary. I had planned to celebrate it at Canyon de Chelly, where we'd celebrated 3 times previously – 2007, 2012, 2017. So, instead, I planned to celebrate on Capulin Volcano. First couple of stops – Vietnam Veterans' Memorial and Raton Museum, went fine. Capulin was windy, and I didn't think I could handle the trip to the top. Drove the next 200 miles to Liberal, found I'd made the reservation for the wrong day. So I'm on the 4th floor, with all this stuff to load up tomorrow for a 460 mile trip. I'm at 2400 for the trip. Too tired to write more, but will add all the details (& some pix) after I get home.

Here's the story: Left about 0730 after motel breakfast. Quality Inn was OK, price higher than I'd like to pay, but this is Taos! On the way to US-64 east I went through 3 double-lane roundabouts, then climbed a short distance before a long descent, then back up to a high pass. I came down the steep east side to 8420' Angel Fire, site of the New Mexico Vietnam Memorial. We'd stopped there many times; I lost HS & USAFA classmates in Nam, and Sandra worked at the Army Home Town News Center typing up press notices during the time. 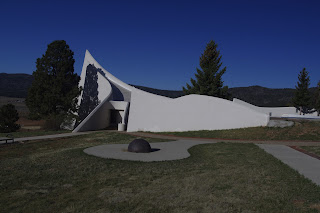 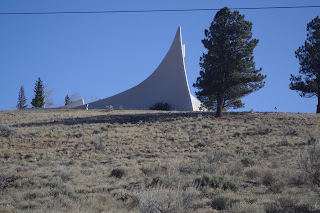 Left the area through a prairie dog metropolis with views of Mt. Wheeler, highest peak in New Mexico, still carrying a lot of snow. Eagle's Nest (town by a reservoir) has a large solar array and Tomboy Drive. Then it's down a long canyon road alongside the Cimarron River (in N.M., known as the 'wet' Cimarron) to Ute Park. Many barren hillsides between Ute Park and Cimarron mark the course of the Ute Park fire several years ago.

As I left the mountains, to the south I saw the plume of smoke from the major Hermit's Peak fire near Las Vegas (NM). I pass he Colfax Tavern at a crossroads in the middle of nowhere – it advertises an upcoming “Battle of the Bands” there. Pronghorns in abundance graze here, although the grass is still brown, even this late in the year.

He NRA Whittington Center has 4 skeet fields (I notice these, as you'd expect). It celebrates, and preserves a bit of, the Mountain Route of the Santa Fe Trail. 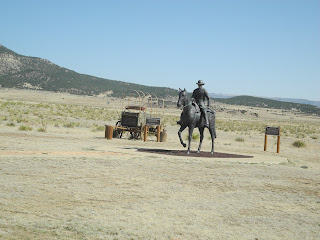 The road to Raton crosses the Canadian River, here a trickle in a small arroyo. In Raton, I stop at the local downtown museum and talk to Roger Sanchez, its curator and driving force. We first met him at a much smaller venue near the railroad. My favorite restaurant was closed at lunchtime, so I ate at overpriced and underflavored Cafe Lemus.

Next stop, about 25 miles down the line, was Capulin Volcano Nat'l Monument. Sandra & I first visited in 2002; in 2010 we hiked the rim and kissed at the top. This time it was colder and windy and I'm just a tad older,so I stayed at the parking area near the top and channeled Sandra – I talked to people. One couple was gravely disappointed that they couldn't see the snowcapped Sangre de Cristo Mountains; they hadn't heard about the ongoing fires upwind. 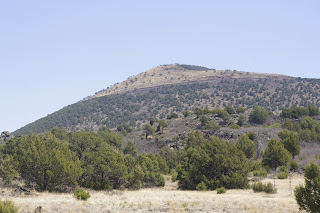 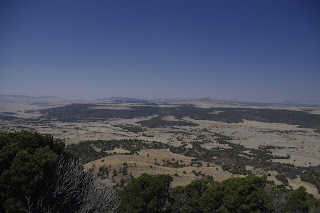 Where are the mountains?

I took a side trip to Folsom, to see if the museum was open. “Tomorrow,” they said. A flash flood many years ago led to a discovery by George McJunkin, a self-educated black cowboy, of spear points embedded in bison antiquus bones dated much earlier than the then-accepted time of human settlement. This definitely changed how we viewed ice age history.

The road goes through the Clayton-Raton volcano field, with the easternmost cone the famous Santa Fe Trail (Cimarron cut-off) landmark, Rabbit Ears. Crossing the Oklahoma border, the time suddenly became an hour later. Boise City had a real roadrunner running across the road; it also had lower gas prices, better than Guymon where I toppped off.